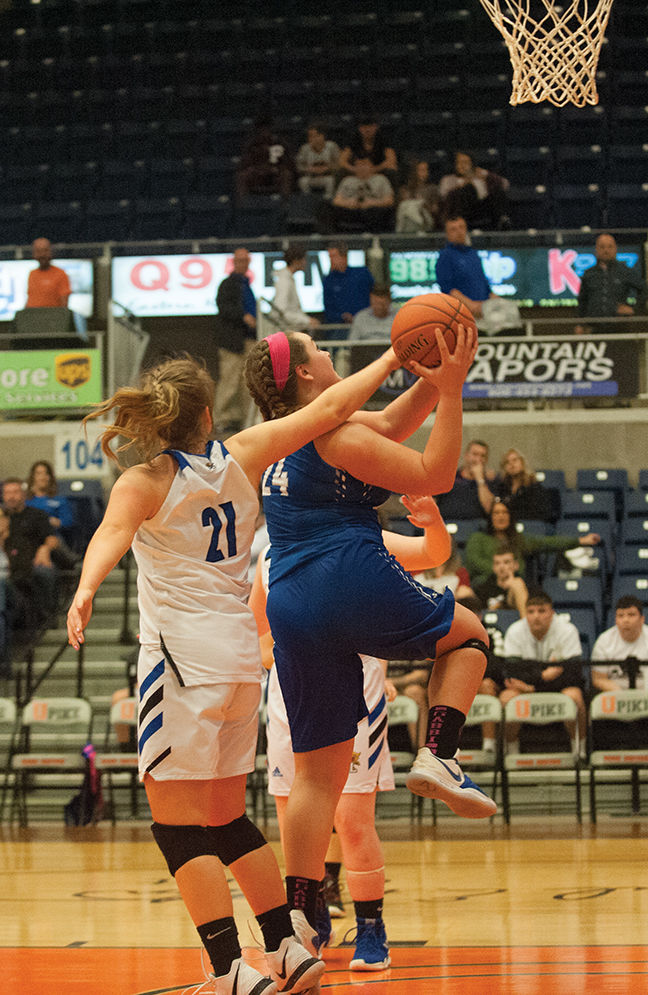 Phelps’ Kylie Hall goes up for a layup against Betsy Layne in the 15th Region All “A” Classic semifinals Sunday at the Appalachian Wireless Arena. Phelps was scheduled to take on Shelby Valley in the championship Monday night in the championship. 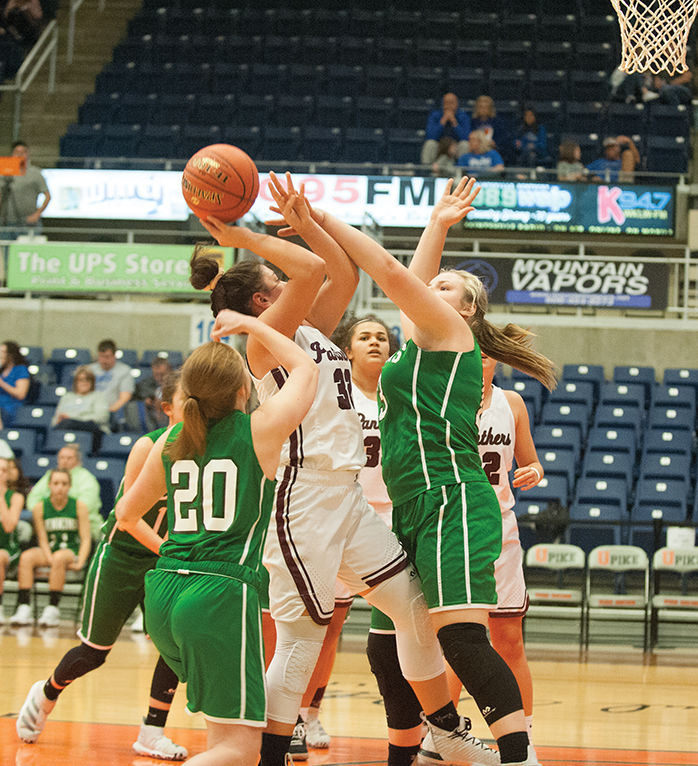 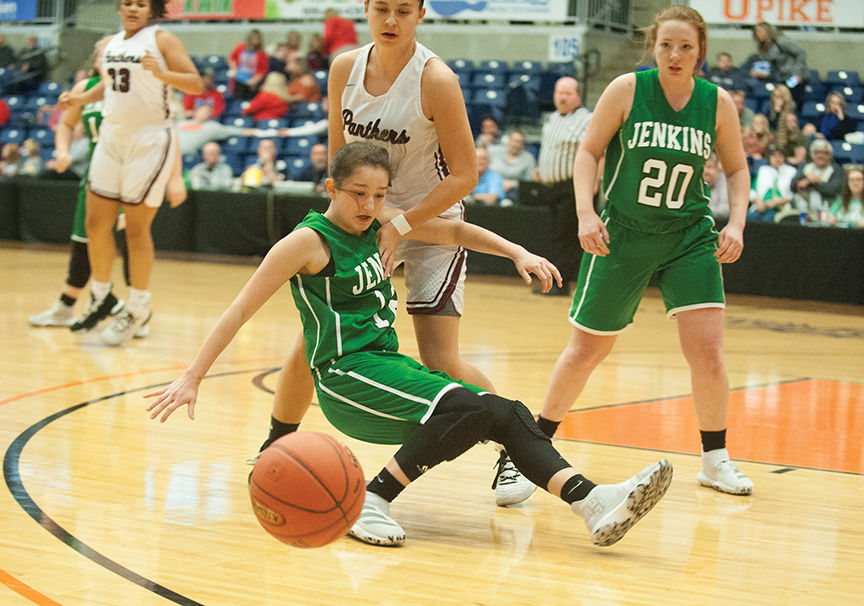 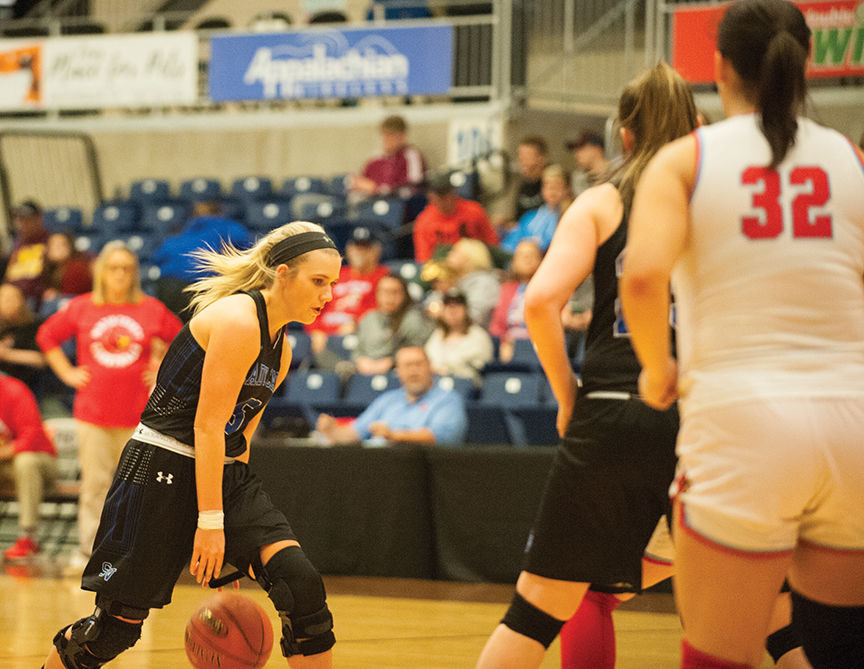 Shelby Valley’s Cassidy Rowe dribbles the ball down the court Friday evening against Martin County in the 15th Region All “A” Classic at the Applachian Wireless Arena. Rowe made her season debut Friday night and played 11:36 minutes of action.

The 15th Region All “A” Classic championship is set.

After a big weekend of basketball at the Appalachian Wireless Arena, Shelby Valley and Phelps are the two teams left to do battle for the championship.

The game took place Monday night and ended too late to be included in this edition of the News-Express. See Thursday’s edition for the championship story.

Cassidy Rowe made her season debut Friday night against Martin County in the 15th Region All “A” Classic, but Sunday in the semifinals, she helped fuel Shelby Valley to a big win.

The Lady Wildcats and Lady Panthers were tied at 25-25 midway through the third quarter.

That wasn’t the end of the run, though. The Lady Wildcats added seven more to cap off a 15-0 run and take a 42-27 lead. Alyssa Newsom added a basket after Cassidy Rowe’s second three, followed by an offensive rebound and putback by Zoee Johnson. Eslwick split a pair of free throws and then Tori Hampton capped off the run with a basket at the 1:28 mark to push the lead to 42-27.

Pikeville’s Emma Ratliff knocked down a three to end Shelby Valley’s 15-0 run and cut the lead to 42-30. Shelby Valley held a 44-30 lead entering the fourth quarter of play.

Pikeville didn’t give up in the fourth quarter.

Zoee Johnson answered for Shelby Valley by scoring off of an offensive rebound.

Cole-Williamson scored and was fouled again on the next Pikeville possession; she didn’t make her free throw this time, though.

Pikeville couldn’t cut into Shelby Valley’s lead any closer than that.

Trinity Rowe led the way for Pikeville with a team-high 11 points. Trinity Rowe scored nine of her points in the first half. She had seven assists, three rebounds and two steals to go with her 11 points.

This was the second meeting of the two schools this season. Pikeville won the first game 54-53.

Shelby Valley (10-5) took on Phelps in the 15th Region All “A” Classic championship last night. The Lady Wildcats are scheduled to take on Scott at George Rogers Clark in the MLK Classic this weekend.

Kylie Hall hit the offensive glass for Phelps Sunday in the 15th Region All “A” Classic semifinals against Betsy Layne.

Hall had quite a performance as she scored a game-high 21 points and pulled down a game-high 14 rebounds to lead the Lady Hornets past Betsy Layne and into the All “A” Classic championship against Shelby Valley.

Out of Hall’s 14 rebounds, eight came on the offensive glass.

The Lady Hornets and Lady Bobcats were tied at 8-8 after the first quarter of play. Phelps’ Chloe Smith scored and was fouled with 3:40 left in the first half; she missed the free throw, but the Lady Hornets held a 17-12 lead. Smith followed with a three to give Phelps a 20-12 lead.

Betsy Layne’s Kennedy Boyette knocked down a three with 1:27 left to cut the Phelps lead to 23-19.

Hall answered for Phelps with a basket and she was fouled on the play; she made the free throw to push the lead to 26-19.

Betsy Layne’s Amelia Blackburn knocked down a pair of free throws with 2:48 left to tie the game up at 33-33.

Phelps held a 40-33 lead over Betsy Layne after three quarters of play.

Jarvis opened the fourth with a basket for the Lady Bobcats to cut the lead to 40-36. Jarvis scored again with 4:04 left to play to cut the Phelps lead to 43-42.

Sargent knocked down a pair free throws for the Lady Hornets with 1:34 left to play to push the lead Phelps lead to 53-47.

Phelps (11-5) hit four of their last five free throws to ice the win and advance to the 15th Region All “A” Classic championship. The Lady Hornets were scheduled to take on Shelby Valley in the championship game.

The Lady Bobcats took control in the second quarter and never looked back as they held on for the nine-point win to advance to the 15th Region All “A” Classic semifinals Sunday.

Phelps was scheduled to play Piarist, but Piarist dropped out of the tournament giving Phelps a Bye until the semifinal round.

With the game tied at 13-13 after the first period of play, the Lady Bobcats outscored Prestonsburg 21-11 in the second to take a 34-24 halftime lead.

Shelby Valley’s Alyssa Elswick dominated the paint against Martin County’s Madison Thompson Friday night in the 15th Region All “A” Classic at the Appalachian Arena.

Cassidy Rowe played 11:36 in her first game back from injury this season.

Shelby Valley forced Martin County to turn the ball over 17 times, while only turning it over seven times themselves.

The Lady Wildcats also won the battle of the boards 29-26.

Kirsten Cole-Williamson was too much for Jenkins in the paint as the Lady Panthers picked up a big win over Jenkins to advance to the 15th Region All “A” Classic semifinals.

Cole-Williamson scored a game-high 21 points and pulled down a game-high 17 rebounds to lead the way for Pikeville Friday night at the Appalachian Wireless Arena.

Jenkins had 16 turnovers, while Pikeville turned it over 14 times.

Pikeville dominated the boards, though. The Lady Panthers pulled down 48 rebounds compared to Jenkins’ 27.