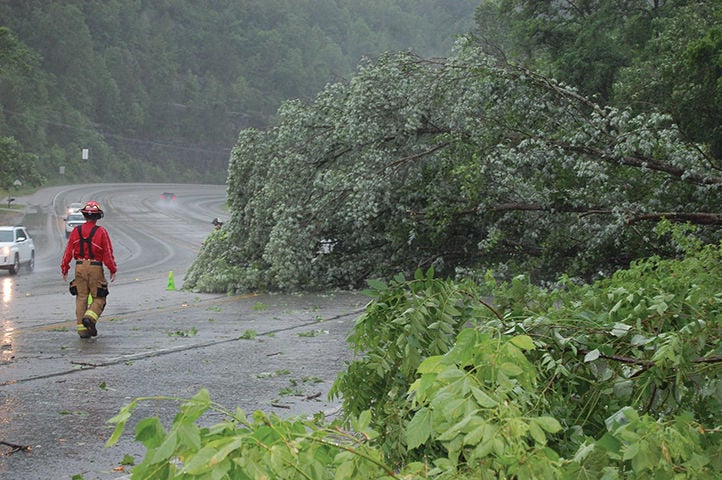 A Belfry firefighter walks toward a tree fallen in the roadway on U.S. 119 after storms ripped through the area Wednesday afternoon. Pike officials reported mostly minor damage as a result of the weather. 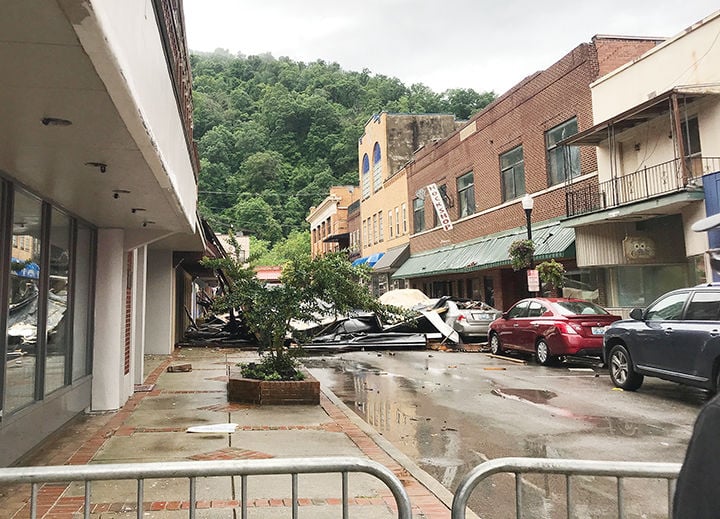 One person was left dead in Prestonsburg after a storm there Wednesday. The victim had not been identified as of presstime Wednesday.

A Belfry firefighter walks toward a tree fallen in the roadway on U.S. 119 after storms ripped through the area Wednesday afternoon. Pike officials reported mostly minor damage as a result of the weather.

One person was left dead in Prestonsburg after a storm there Wednesday. The victim had not been identified as of presstime Wednesday.

One person was killed and thousands were left without power Wednesday as storms raged through the region, packing high winds and heavy rains.

While Pike was spared much of the worst the storms carried, in nearby Prestonsburg a person was left dead.

At approximately 2:15 p.m., a storm carrying what Mayor Les Stapleton called “straight line winds” of up to 60 mph pummeled the city, causing trees to fall on two houses, a tree to crash into a car near City Hall and a 100 ft.-long rooftop to blow off of the former Hock Shop building and crash onto cars on West Court Street.

“A vehicle was trapped under the debris and there’s been one fatality reported in that,” Stapleton said. He said the vehicle was traveling on West Court Street when the roof blew off the building.

Prestonsburg Fire Department Lt. Celina Thomas, a paramedic and Stapleton were first on the scene. Thomas said the driver of the vehicle was deceased, but the passenger was already out of the vehicle, physically uninjured but “emotionally distraught.”

“Myself and Mayor Stapleton were the first ones to the vehicle. We managed to get the windows broke. We checked on the individual. He was obviously deceased. At that point, we secured the scene, got people out of the way and just waited on extra personnel to get there.”

The victim’s identity had not been released as of presstime Wednesday.

The roof hit and damaged four cars on Court Street, three of which were parked.

She said it was a “miracle” that there weren’t any more wrecks during the storm, describing the conditions as a “whiteout.”

Pike County Emergency Management Director Doug Tackett said that despite the heavy rain and wind, the county didn’t appear to have suffered any major damage as a result of the storms.

“We’ve had some tree limbs end up in the road and one or two car ports that got blown down but that’s about it.” Tackett said.