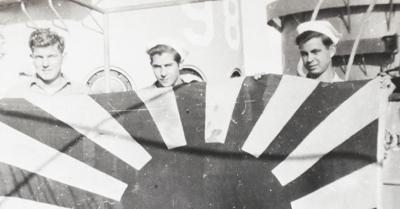 Memorial Day is about remembrance. For 93-year-old World War II veteran, Hassel Justice that’s something that doesn’t come as easy as it used to. Some memories he’ll never forget, but for the ones that don’t come so clearly, he keeps something to help him remember.

Hassel was born on Jan. 26, 1926 and raised, alongside his older brother Hazard, around the Shelbiana area. Hazard Justice was born on March 21, 1924, making him almost two years older than Hassel, but their age difference didn’t separate them.

“We were like two pups growing up,” Justice said. “Like all brothers, we’d fight and get into disagreements one day, but the next day we’d be right back to being best friends.

“I loved him.” Justice added.

According to Rick Newsom, Hassel’s son-in-law, as Hassel and Hazard were growing up, World War II started, and they were living in a time where “there was a great effort to try and encourage people to join the military”.

Once of age, Hazard joined the Army Air Corps, which according to Newsom, hadn’t at that point become known as the Air Force. He joined on Dec. 7, 1942, the one-year anniversary of Pearl Harbor.

Hazard went on to become a turret gunner and radio operator, en route to earning the title of Staff Sargent.

According to Justice, his brother retuned home on leave after some time and once it was time for Hazard to return back to his home base, he took it upon himself to drive Hazard to the train station in Pikeville.

“I took him to the train because it was time for him to report back to his base,” Justice said. “The last words he said to me was, ‘Stay out as long as you can.’

“He went ahead and got on the train while they were loading his gear up and when they were pulling out of the station, he threw his hand up at me and waved at me – that’s the last time I seen him.” Justice said.

Upon the two brothers’ farewells, Hazard reported back to his base in Roswell, New Mexico, for training before getting stationed in England, according to Justice. Hassel instead of listening to his brother’s advice, was motivated to follow in his footsteps.

“My dad got stationed there as well during his time in the Air Corps, I guess that was where most of the troops were stationed at during the European conflict,” Newsome said Thursday before leaving the room to speak to a co-worker, leaving Justice alone to sort through his thoughts.

According to Justice, Hazard was a part of a 10-man, B-17 bomber crew, and served as a belly gunner. The crew was on a bombing mission heading towards Germany, a mission that would take the crew and their escorts over Belgium.

“When they were over Belgium, that’s when German fighter planes came up on them and began attacking, trying to shoot them down,” Justice said before pausing for a moment. “That’s when they got my brother.”

Justice, who was so eager to follow the path his older brother had set down, set off to join the armed forces a day before he was even old enough to enlist. After officially joining the next day, on his birthday, Hassel went off to basic training before returning home on leave when the news finally made it to him and his family regarding Hazard’s fate.

Hassel was in his hometown area of Shelbiana getting gas when the two officers showed up asking directions to his parent’s house, he said. Seeing the enclosed envelope, he knew something was going on, so Hassel sped off to follow them. Once he arrived home, he heard the news, Staff Sgt. Hazard Justice was K.I.A. during the attack on March 2, 1944, 19 days before his 20th birthday. That left the image of Hazard waving goodbye as the final memory Hassel would share with his brother.

According to Newsom, of the 10 crew members in Hazard’s B-17 crew, seven survived.

Hassel said his childhood inspired his choice of military branch.

“I joined the Navy instead of the Air Corps because I always loved the water growing up, I was a swimmer,” he said with a smirk on his face.

Hassel became a Gunner’s Mate, 3rd class Amphibious Forces in the U.S. Navy and was a member of the crew for USS LCI(L)-687 a Land Craft Infantry ship.

At that point in his interview Thursday, reached across Newsom’s desk and grabbed an old, black book. Then, the memories continued to flow.

“This is an old Navy photo album,” he said. “Only the skipper was allowed to have a camera, so these are all pictures that he took.”

Each picture-littered page served as a key that would unlock a memory or a story from a past almost long-forgotten.

“This right here is the type of ship I was on,” Justice said, pointing at a black and white photograph of a huge 158-foot landing craft. “I liked being on the water then, but you had yout eyes peeled looking for trouble because when it was coming, or where it was coming.”

“I remember my first battle,” Justice said. “Some Japanese,” – he paused for a moment and closed his eyes, almost as if trying to visualize the experience – “Kamikaze bombers, that’s the ones. They began trying to fly into our ships.”

Hassel said one plane flew right toward his craft before being shot down, causing it to veer enough to miss the ship.

“It crashed in the water so close that water flew up and hit me right in my face as I was on the deck,” he said.

Hassel flipped the page and then pulled out two photos. The first shows a young man whose name escaped Hassel, but who he remembered loved booze. That love, Hassel said, was just the thing that did him in.

“This is a picture of merchant boat,” Justice said, pointing to the second photo he pulled out. “They’d come up to the ship and try to sell us alcohol and a bunch of other stuff, but the skipper told us to never trust them.”

According to Justice, he was to relieve the soldier from the first photo from watch late one night after a merchant ship had come and gone.

“He had bought a bottle of sake earlier that day from a group of merchants. Well when I came to relieve him, he had already passed,” he said.

At that time, a lot of the merchants who would come to sell items to the soldiers would try to poison them, hence the skipper’s warnings to not trust them, he said.

The next photo ignited a more fond memory, a young Hassel Justice, home from the war with his first car.

“I knew what I was doing was important, but I still thought about home and I couldn’t wait until then,” he said, as if that photo had reminded him of the life he had dreamt about on that ship as he waited to return home. Hassel received an Honorable Discharge on April 18, 1946, not long after the war had ended.

“This is when he came back and that’s the first car he ever owned,” Newsom said.

“That’s a 1949 Ford Sedan,” Hassel said, “I changed the headlights on that, I had to kind of fancy it up a little.

“You know, something a youngster would do,” he added with a smile, something that showed up more Thursday as he recalled his old stories. Just an hour earlier, he had trouble remembering those stories.

Justice put away the photo album, almost like he didn’t need those little keys to his memory any longer, and began talking about his time once he returned home.

He married shortly after he returned to the states and began working for the Pike County Board of Education.

“I started out doing maintenance, but worked my way to where I was doing a little bit of everything,” Justice said. “It wasn’t long before I started helping building schools throughout the county.”

Some of the schools in which Justice had a hand building included Johns Creek Elementary School, Dorton, the old Mullins School, which is now the North Point Academy and the old Phelps Elementary School and gym that was torn down a few years back, among a number of others.

“Some of the last projects I oversaw were the McCoy Athletic Center (Phelps High School’s gymnasium), Phelps’ Vocational building and the last one I was in on was Shelby Valley High School,” he said. “I even got offered a state job in Frankfort, but I turned it down.”

Justice worked his way up to director of Buildings and Grounds, yet again following in the footsteps of a family member, as his father presided over the position until his retirement “around ’64 or ’65,” Justice said.

Hassel retired from his father’s former position on June 30, 1989. For the first time since he left out as a young 17-year-old, his working days were finished. However, his remembering days are still going on, he just needs a little help from time to time.

“Did you make sure you grabbed the photo album?” Justice asked Newsome as the interview came to a close.