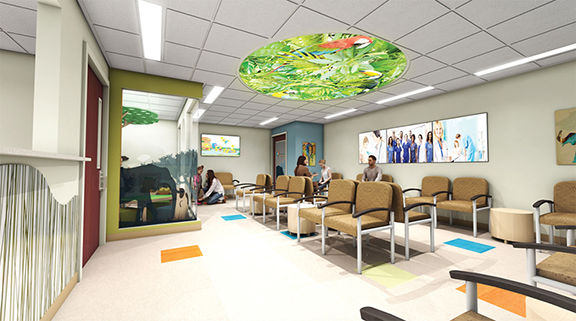 Artist’s renderings show the plans for the new Children’s Hospital and Pediatric Clinic at Pikeville Medical Center. Hospital officials said this week that construction on the facility may begin as early as next month. 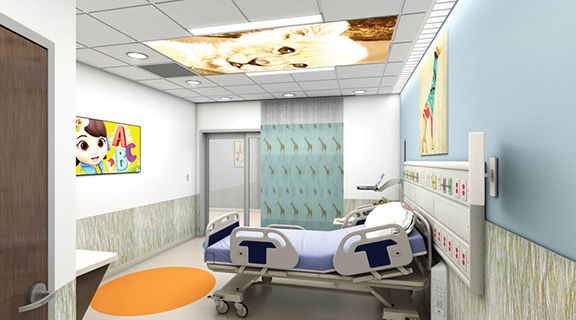 Artist’s renderings show the plans for the new Children’s Hospital and Pediatric Clinic at Pikeville Medical Center. Hospital officials said this week that construction on the facility may begin as early as next month.

During the 2019 SOAR Conference held in the Appalachian Wireless Arena, Pikeville Medical Center (PMC) received one of two grants totaling nearly $6.3 million to construct and equip the region’s only children’s hospital and pediatric clinic.

According to a statement from the hospital, PMC’s administration has been working diligently to plan, design and bid the project.

The larger of the two grants, $4.78 million, was awarded by Abandoned Mine Lands (AML), and is now in the final stages before implementation. Construction bids were received and opened last week. The lowest bid is less than the grant total and will enable the entire project to be constructed during the first phase, rather than two phases.

“After months of meetings, discussions and planning, we expect the final contracts to be signed by the end of June in order to award the bid and issue the notice to proceed by July,” explained PMC Vice President of the Board of Directors and CEO Donovan Blackburn. “Thanks to the overwhelming support of Congressman Hal Rogers and AML’s grant selection committee, our dream of developing a children’s hospital is about to become reality. Not only will we add jobs to our struggling economy, but we will be able to provide care to some our region’s youngest and most vulnerable patients.”

When complete, the statement said, the PMC Children’s Hospital will provide world-class quality health care in our community. This will allow more families to stay close to home, greatly reducing the financial burden that comes with traveling to hospitals hundreds of miles away.

“We have spent several years working to find ways to better serve our pediatric patients,” said PMC Senior Vice President, Chief Medical Officer and Assistant CEO Aaron Crum, MD. “The PMC Children’s Hospital will be the first and only children’s hospital in our region, helping to fill the existing gap in pediatric care. We couldn’t be more excited to get started.”

Following the AML Pilot Grant announcement at the SOAR Summit in September 2019, PMC was awarded a $1.5 million power initiative grant from the Appalachian Regional Commission (ARC). The grant will allow PMC to purchase state-of-the-art equipment for the children’s hospital.

Blackburn contacted Congressman Hal Rogers two years ago, regarding the need to develop a Children’s Hospital in our region. Blackburn stated, “It is great to see our hard work come to fruition. Congressman Rogers continues to work with PMC on several new initiatives and projects”.

The statement said the new Children’s Hospital is part of an overall plan to bring expanded pediatric services to the children of our region. In 2019, the PMC Emergency Room was one of only four hospitals in the state of Kentucky named as a Pediatric Friendly hospital. PMC will begin renovating a wing in the Emergency Department that will be pediatric friendly, thanks to a grant recently received by Kentucky Power. The hospital was also the first emergency department in Kentucky to earn the Certified Autism Center Designation. Additionally, soon there will be a major announcement regarding an investment for the treatment of pediatric patients with autism, the statement said.

PMC recently doubled the capacity of the NICU from eight beds to 16 beds. The new Certificate of Need permits PMC to care for newborn babies born at 28 weeks and greater than or equal to1200 grams of weight. This will enable many preemies to receive the special care they require here, rather than in a hospital hours away.

To continue to serve the children of our county, the statement said, Pikeville Medical Center will provide TeleHealth in every public elementary school in Pike County. Currently there are plans to expand this to middle and high schools as well. This service will provide access to primary and pediatric care while the child is in school.

Blackburn explained, “The new PMC Children’s Hospital & Pediatric Clinic will bolster the regional health care industry, diversify the economy and strengthen the regional workforce. It will be a great win for our entire region.”

Blackburn said the board of directors would make the approval for the project to begin by the first of July.